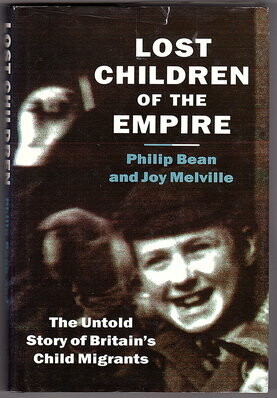 Lost Children of the Empire by Philip Bean and Joy Melville

Secondhand. Very good condition. Book has minor wear to corners and edges. Some sunning to top foredge. Dust jacket is in good condition with a tear to top edge of front cover - repaired with book tape.

The extraordinary story of Britain's child migrants is one of 350 years of shaming exploitation. Around 130,000 children, some just 3 or 4 years old, were shipped off to distant parts of the Empire, the last as recently as 1967.

For Britain it was a cheap way of emptying children's homes and populating the colonies with 'good British stock'; for the colonies, it was a source of cheap labour. Even after the Second World War around 10,000 children were transported to Australia - where many were subjected to at best uncaring abandonment, and at worst a regime of appalling cruelty.

Lost Children of the Empire tells the remarkable story of the Child Migrants Trust, set up in 1987, to trace families and to help those involved to come to terms with what has happened. But nothing can explain away the connivance and irresponsibility of the governments and organisations involved in this inhuman chapter of British history.