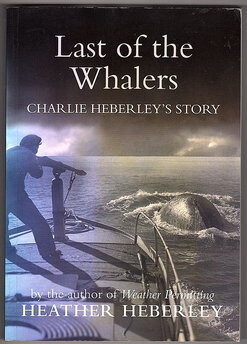 Last of the Whalers: Charlie Heberley's Story by Heather Heberley

Last of the Whalers is the story of a remarkable man, Charlie Heberley, a story lovingly researched and written by his daughter-in-law, Heather Heberley.

Charlie and his mates were the last of a breed of men New Zealand will never see again.

The famous Worser Heberley (1809-1899) was Charlie's great-grandfather. With whaling in his blood, young Charlie joined the Perano whaling enterprise. He soon became an acknowledged leader. It was a rough, tough and dangerous occupation, enlivened by constant pranks, and sustained by the whalers' code of honour.

Years before he died in 2000, Charlie became an ardent conservationist, blasting those countries which persisted in unbridled whaling.

Last of the Whalers has gripping accounts of pursuits, captures and processing of whales in Tory Channel and later at Great Barrier Island. (back cover)