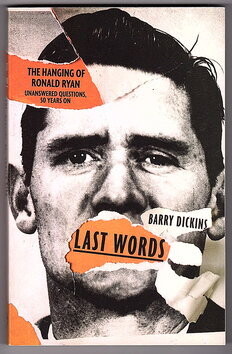 Last Words: The Hanging of Ronald Ryan by Barry Dickins

From acclaimed playwright and writer Barry Dickins, Last Words is the story of Ronald Ryan, the last man hanged in Australia.

Fifty years after his death, questions remain unanswered. Ryan had been found guilty of murdering prison officer George Hodson during an escape from Pentridge Prison with fellow inmate Peter Walker. But did he really fire the bullet that killed Hodson?

On 3 February 1967, despite public outrage and vocal protests from wide-ranging community groups, Ryan became the last person to be legally executed in Australia.

It was the first time in 20 years that the death penalty had been enforced by the state. Many thought that Ryan's execution was Victorian Premier Henry Bolte's attempt to bolster his chances of winning the upcoming Victorian election, during which he ran a campaign promoting his law-and-order agenda.

Last Words is as much about the hanged man as much as it is about the trauma of his family, and the political opportunism behind the decision to proceed with the hanging.

In Dickins' lyrical prose he takes readers into the last weeks of Ryan's life and brings to life this infamous man whose personal story has gone undocumented until now. (back cover)