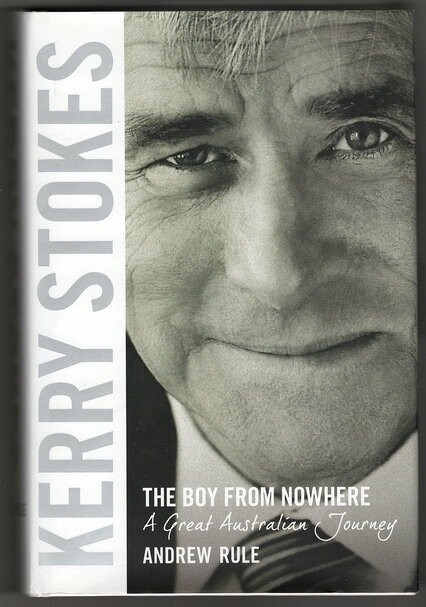 Kerry Stokes: The Boy from Nowhere by Andrew Rule

Kerry Stokes is a remarkable Australian. Not because he is one of Australia's wealthiest and most powerful people, but because of what he overcame to get there and because he has endured when others didn't. His success and his rise have intrigued the business world for decades but there is so much more to him than multi-million dollar deals or mergers.

Behind the laconic front is a human story as tough and touching as a Dickens tale: Oliver twist with great self-expectations. It is the story of a poor boy who stared down poverty, ignorance and the stigma of his illegitimate birth to achieve great wealth and fulfilment.

He's a backstreets battler who has become a power player. It's a compelling and inspiring story that, until now, he has not told. Now he oversees a multi-billion dollar media, machinery and property empire. He is renowned for his art collection and for philanthropy, spending millions of dollars to buy - among other things - Victoria Crosses from soldiers' families to donate to the Australian War Memorial.

But he's a private man. A man apart. He made his name in the West but kept his distance from the buccaneering band of entrepreneurs who forged fabulous fortunes in Perth from the 1960s until the 1987 crash. Bond went to jail, Holmes a Court died; Connell did both. Lesser lights flickered and faded but Stokes grew stronger, becoming a player alongside Murdoch, Packer and Lowy. His story fascinates all the more because he has spent most of his life guarding it. But now he's telling it, to one of Australia's great storytellers.

He is the boy who came from nothing, who had nothing to lose. And now he has everything. It's a great Australian journey. (back cover)