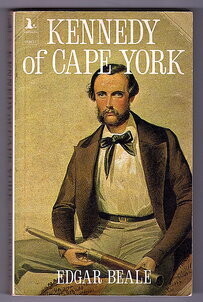 Secondhand. Good condition. Remnant with wear to book corners and edges. Spine has cracked but binding has been reinforced. Sunning of pages.

One of the first comprehensive biographies of Edmund Kennedy. Edgar Beale presents Kennedy as a brave and gifted character.

Kennedy arrived in Australia in 1839 and through family connections was appointed an assistant surveyor. His first significant expedition was as second in command to Sir Thomas Mitchell's on Mitchell's 1846 exploration of the northern interior (now Queensland) of New South Wales. Kennedy performed so well he was given his own expedition.

In 1847, Kennedy led a small group to the Gulf of Carpentaria to plot the course of the Victoria River. Kennedy and his men came near death but managed to return safely. With this success, Kennedy in 1848 was appointed to lead an expedition to Cape York. It became one of the most ambitious and disastrous expeditions in British 19th Century exploration of Australia. Based on misleading information and enduring dreadful conditions, Kennedy perished. His Indigenous Australian guide Jackey Jackey saved the remaining men by leading rescuers to their camp.