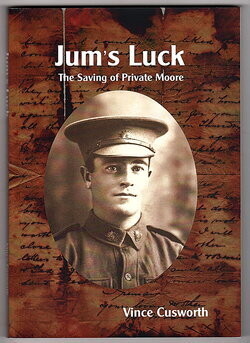 Jum's luck: The Saving of Private Moore by Vince Cusworth

Jum Moore was born in Victoria just as the gold rushes there petered out and depression hit the entire eastern half of the continent. A young Jum moved with his family to Boulder on the West Australian goldfields at the turn of the last century searching for a better life.

Hard work and sacrifice were just beginning to bear fruit when Australia and the rest of the world were plunged into a war that was to decimate an entire generation. Jum and three of his brothers signed up to fight for King and country and for an adventure on the other side of the world.

What transpired though, was an un-imagined catastrophe that would claim the lives of three of the boys. Far from home and already wounded himself, it would be his mother's love that would save him from France's killing fields and the dedication of his childhood sweetheart that would help him survive the traumatic after-effects.

With the most tumultuous and defining period of Australia's history swirling around him, Jum's luck would see him through and enable him to start again to build a life after the war, a future denied to his three brothers and to many of his fellow diggers. (back cover)