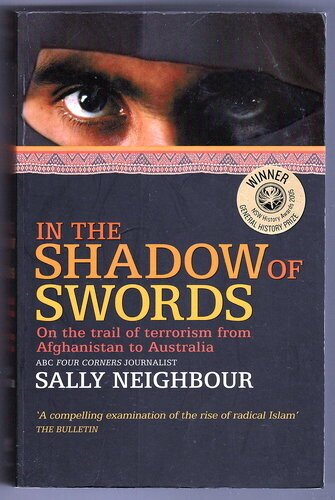 In the Shadow of Swords: On the Trail of Terrorism from Afghanistan to Australia by Sally Neighbour

Following the Bali bombings, Australia suddenly found itself in the middle of the global war of terror. Worse still, it was a war with an enemy we never knew we had, and one we were struggling to understand.

Award-winning ABC journalist Sally Neighbour has reported extensively on the rise of terrorism in South East Asia; the motivation, the leaders, the followers and the methods of training.

Here, she takes readers into the secretive worlds of the men who masterminded terrorist acts, following their trail through the extensive network of mosques, religious schools and training camps where Osama bin Laden casts a long and formidable shadow.

In this fully revised and updated version, Neighbour documents how Australia became caught up in the war on terrorism and how, despite the best of intentions, Australia's foreign policy in Iraq, Afghanistan and East Timor helped make it a target.

Neighbour, one of Australia's finest journalists, gives a gripping account of how violent operatives have been able to penetrate Australia. She outlines the arrests and trials since the Bali bombings and details the ongoing efforts to track down the hundreds of terrorists still at large. thoughtful and utterly compelling, In the Shadow of Swords shows why the war on terrorism is far from being over. (back cover)