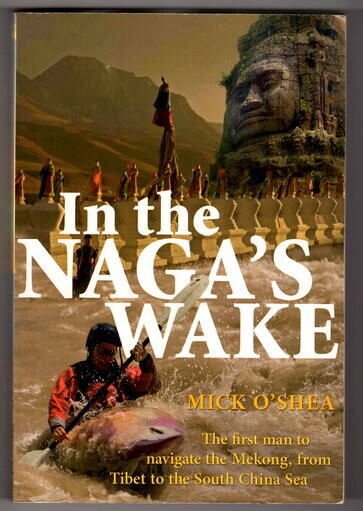 In the Naga’s Wake by Mick O’Shea

An adrenalin-pumping, heart-stopping account of one man's dream to become the first person to navigate the full length of the mighty Mekong from its source in Tibet to the South China Sea.

Mick O'Shea had a dream. He wanted to be the first man to travel down the mighty Mekong River, the mother of all rivers, from source to sea. In a kayak. Alone.

But then Mick was never an ordinary bloke. Growing up in hot, dusty and landlocked Kalgoorlie, his childhood was spent catching poisonous snakes and exploring abandoned mine shafts for fun, and later, fishing for sharks off the south coast of WA. During his holidays, he'd hang out with SAS soldiers who were running extreme adventure outbound camps for kids, soaking up skills in rock climbing, abseiling, wilderness survival, canoeing, caving and navigation. This childhood lay the template for the rest of Mick's life - adventure, adrenalin, and not a little danger.

When Mick first laid eyes on the Mekong as a twenty-year-old traveller, he was immediately hooked by its beauty, its diversity and its spiritual and cultural importance to the people who lived alongside it - not to mention its awesome white water rafting opportunities. When he realised that the Mekong, known to many of the people who lived along its banks as 'Kong, Mother of Water', had never been fully navigated or explored, a dream was born.

In the Naga's Wake is the extraordinary story of how Mick undertook the first-ever navigation of the Mekong, a journey undertaken largely in a kayak, and largely alone. From sheer-sided, remote gorges to terrifying rapids, deadly whirlpools to Tibetan bandits, floating headless bodies to ex-Khmer Rouge extortionists, looming Chinese dams and equally terrifying Chinese soldiers, his was a white-knuckled, breathtaking, exhilarating and extremely dangerous ride into the unknown.