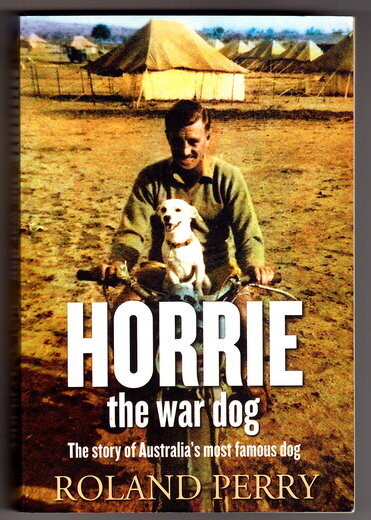 Horrie the War Dog: The Story of Australia's Most Famous Dog by Perry Roland

In the harsh Libyan desert in the middle of the second world war, Private Jim Moody, a signaller with the First Australian Machine Gun Battalion, found a starving puppy on a sand dune. Moody called the dog Horrie.

Much more than a mascot, Horrie's exceptional hearing picked up the whine of enemy aircraft two minutes before his human counterparts and repeatedly saved the lives of the thousand-strong contingent. The little Egyptian Terrier's ritual of sitting, barking, then dashing for the trenches, had the gunners running for cover before their camp was strafed and bombed.

Where Moody went, Horrie went too, through the battle zones of the Middle East and far beyond. As the Japanese forces began their assault in Asia Moody and his soldier mates joined the fight, but not before they had smuggled Horrie onto a troop ship and a harrowing journey back to Australia where they thought their little friend would be safe.

The war over, Moody brought Horrie out of hiding to raise money for the Red Cross, and the brave little dog's story became widely known. When quarantine officers pounced and demanded that the dog be put down there was a huge public outcry. Horrie had saved a thousand lives. How could a cruel bureaucracy heartlessly kill him? But defying the authorities would mean gaol for Moody and certain death for Horrie. Was Horrie, the gunner's hero, condemned to die or could Moody devise a scheme to save him?

In the finest ANZAC tradition, Horrie the War Dog is a story of intrigue and illusion, and of sacrifice, courage and loyalty. Best-selling author, Roland Perry, tells this remarkable true story for the first time.