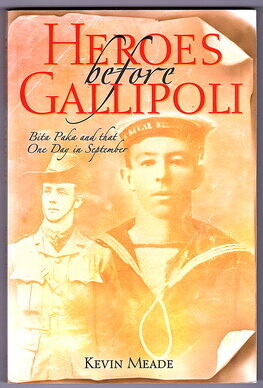 Heroes Before Gallipoli: Bita Paka and That One Day in September by Kevin Meade

Seven months before Australian troops landed at Gallipoli, a sailor from Melbourne became the nation's first casualty of World War I. Able Seaman William (Billy) Williams was mortally wounded while en route to capturing a German wireless station at Bita Paka, near Rabaul. The date was September 11, 1914.

Only ten days later, all of German New Guinea was formally surrendered to Australia. Overshadowed by Gallipoli, the New Guinea campaign has been largely forgotten.

The New Guinea campaign saw a number of first for Australia, including the first overseas military expedition planned and coordinated by the newly created nation, the first land operation of WWI and the war's first bravery award for Australia.

Heroes before Gallipoli is a detailed account of the campaign told through first-hand accounts of soldiers and sailors.