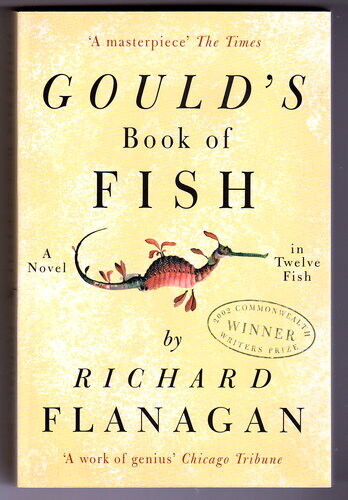 Gould's Book of Fish: A Novel in Twelve Fish by Richard Flanagan

Once upon a time, when the earth was still young, before the fish in the sea and all the living things on land began to be destroyed, a man named William Buelow Gould a white convict who fell in love with a black woman and discovered too late that love is not safe. Silly Billy Gould, invader of Australia, liar, murderer and forger, condemned to the most feared penal colony in the British Empire and there ordered to paint a book of fish.

Acclaimed as a masterpiece around the world, Gould’s Book of Fish is at once a marvellously imagined epic of nineteenth-century Australia and a contemporary fable, a tale of horror, and a celebration of love, all transformed by a convict painter into pictures of fish. (publisher blurb)