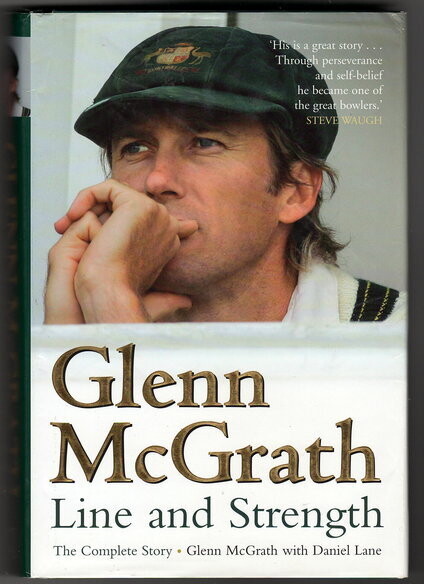 Secondhand. Good condition. Wear to book edges and corners, particularly at spine. Interior and binding are very good. Dust jacket has light creasing at top and tail. Small tear at top back cover is reinforced with book tape.

Glenn McGrath is one of the most highly regarded fast-medium pace bowlers in cricketing history, and a leading contributor to Australia's domination of world cricket from the mid-1990s to 2007. He held the world record for the highest number of Test wickets by a fast bowler. He announced his retirement and his Test career came to an end after the 5th Ashes test in Sydney, whilst the 2007 World Cup marked the end of his one-day career. McGrath was named One Day International Player of the Year and Wisden Cricketer of the Year on more than one occasion.

He grew up in Narromine where his local captain thought so little of his bowling ability that he refused to give him a bowl. His potential was spotted by Doug Walters and he moved to Sydney, famously skinny and living in a caravan. McGrath capped his rapid rise in the next Australian summer with selection in the national side after playing only eight State matches. He relied on unerring accuracy in his bowling and the ability to make the ball seem a little off the pitch.

In 2004, at the age of 34, McGrath took eight wickets for 24 runs against Pakistan in Perth, his best Test bowling figures and second-best ever by an Australian. In 2004 he became the first Australian fast bowler to play 100 Tests.

Glenn McGrath's behaviour off the field is as admirable as on. His wife Jane fought a battle with breast and bone cancer. Jane and Glenn raised substantial funds to provide cancer nurses around NSW and use their high profile to raise money for breast cancer charities.

This is the tell-all story of an Australian country boy who took on the world. (book flap)