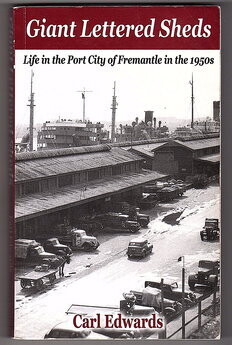 Giant Lettered Sheds: Life in the Port City of Fremantle in the 1950s by Carl Edwards

Carl Edwards, with his parents left England for Fremantle in 1947, as a ten-pound Pom. This is the memoir of his childhood growing up in 1950s Fremantle.

Edwards describes Fremantle as very different from today. "In the 1950s it was very much a working port, with well over 1000 waterside workers manning the docks. Hundreds of trucks and drays were plying the streets and the shops reflected the families that worked in the area. The streets used to be packed with shoppers and workers." (The West Australian 16 August 2011)