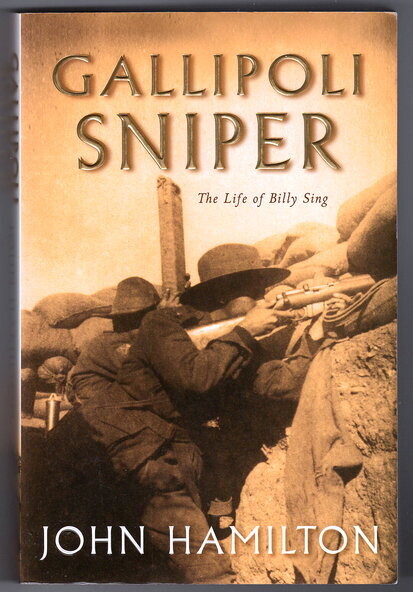 Gallipoli Sniper: The Life of Billy Sing by John Hamilton

The Anzac battlefield on Gallipoli was made for snipers. Scrub, cliffs, spurs and hills meant that both Anzac and Turkish positions often overlooked one another. The unwary or unlucky were prey to snipers on both sides, and the sudden crack of a gunshot and instant death were an ever-present menace.

The most successful and most feared sniper of the Gallipoli campaign was Billy Sing, a Light Horseman from Queensland who was almost unique among the Australian troops in having a Chinese-born father. A combination of patience, stealth and an incredible eye made him utterly deadly, with the incredible - and horrifying - figure of over 200 credited 'kills'.

John Hamilton, author of the bestselling Goodbye Cobber, God Bless You, has written an extraordinary account of a hidden side of the campaign - the snipers' war. Following Sing from his recruitment onwards, Hamilton takes us on a journey into the squalor, dust, blood and heroism of Gallipoli, seen from the unique viewpoint of the sniper. Gallipoli Sniper is a powerful and very different account of war and its effect on those who fight. (back cover)