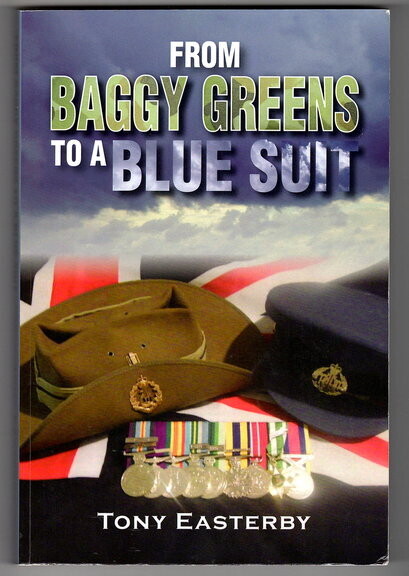 From Baggy Greens to a Blue Suit by Tony Easterby

The title of this book, was decided upon by Tony Easterby having served as an Infantry Soldier with the 4th Royal Australian Regiment from 1964-to 1969. After a two year break from army service, Easterby decided to re-enlist, in the services once again, this time as a policeman with the RAAF in 1971.

Moving from the baggy greens of the army to the blue suit of the RAAF inspired Easterby to write this book. The first part of this book concerning his army service was published in 2002 as the novel Green Mules Green Giants. The new title of this book made little sense without the inclusion of the author's army service.

This book is one man's journey through two military services, Army/RAAF, leaving out most of the harshness associated with military life to concentrate on some of the funnier and interesting times associated with his service life. An interesting life along with a certain fortunate life having survived a parachute malfunction, two minefields, falling down an open well, being wounded in Vietnam, attacked by a knife-wielding airman along with staring down the barrels of a shotgun and a fully loaded .22 Rifle. Both weapons used by the same crazy airman. (back cover)