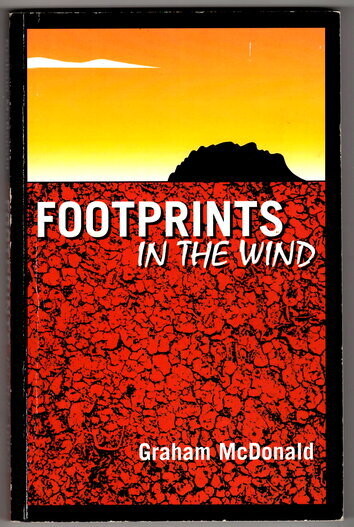 Footprints in the Wind by Graham McDonald

In a remote corner of the West Australian goldfields, two old prospectors watch from the veranda of a pub as familiar vehicle speeds from the desert horizon and skids to a halt before them. A man climbs out and rushes wild-eyed into the front bar, a small bag held guardedly in one hand. He roughly demands a carton of beer than during a fumbling attempt to pay for it drops the bag and out tumble several rich specimens of gold. He frantically gathers them up, storms out of the room and then speeds away in his vehicle again. Less than an hour later he is found dead in it, the victim of a mystifying car crash.

When the two old-timers learn of their fellow prospector's death their thoughts inevitably turn to finding the gold's source. But for one of those men, Reg Arnold, something he experiences whilst seated alone on the pub veranda not long after the man's departure will re-awaken another quest. For him, the search for the gold will become part of a journey of the spirit that will ultimately connect with one begun after a murderous incident over ninety years before. A troubled teenaged grandson from the city soon joins him, other searchers too, as word about the gold gets out and the hunt for it turns into a race.
Gradually, their footprints merge with those of the past, each possessed in a different way but all guided by the influence that sent a terrified prospector racing out of the desert and carrying its glistening message into the pub. (Google books)