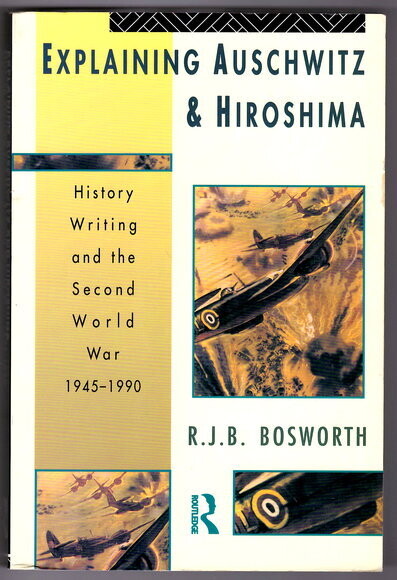 Explaining Auschwitz and Hiroshima: Historians and the Second World War, 1945-1990 by Richard J B Bosworth

Explaining Auschwitz and Hiroshima explores the way in which the main combatant societies of the Second World War have historicised that experience. Since 1945, debates in Germany about the past that would not fade away' have been reasonably well-known. But in this book, Richard Bosworth maintains that Germany is not unique. He argues that in Britain, France, Italy, the USSR and Japan, as well as in Germany the traumatic history of the long Second World War' has remained crucial to the culture and the politics of post-war societies. Each has felt a compelling need to interpret this past event and thus explain' Auschwitz' and Hiroshima'.

Bosworth explores the bitter controversies that have developed around a particular interpretation of the war, such as disputes over A J P Taylor's, Origins of the Second World War, Marcel Ophul's film, The Sorrow and the Pity, Renzo De Felice's biography of Mussolini in the 1970s or in post- Glasnost debates about the historiographies of the Commonwealth of Independent States. Richard Bosworth's book is a wide-ranging and thoughtful excursion into comparative history. (back cover)