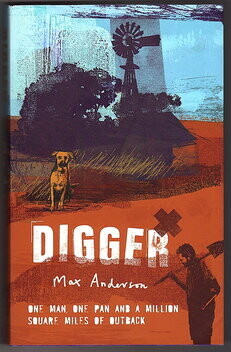 Ever since he was a small boy, Max Anderson has been digging for buried treasure. From excavating his parent's garden to unearthing a flint arrowhead in the fields nearby, he has always sought hidden riches. And so, years later, it made perfect sense for him to travel to one of the remotest parts of Western Australia to spend a year prospecting for gold.

His journey took him to Kookynie, a town of eight buildings that stand in a landscape of rubble, foundations and mining waste - the remains of a town of 3,500 which died before the Great War began.

Over a period of a year, Anderson obsessively sought gold in the soil and landscape around him, at the same time digging his way to the bedrock of an obsession that threatened his relationships, health and sanity.

His search for gold became a search for living history; his story is also that of forgotten communities and a dying breed of man: the rugged prospector whose life is inextricably linked to the land he takes from. (book flap)