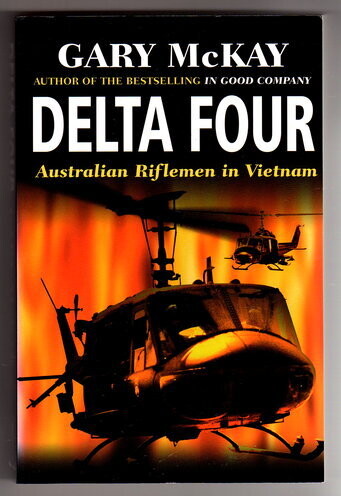 Delta Four exposes the inner workings of a rifle company - how its soldiers trained for war, and how they operated and fought in the war zone. It examines the basic qualities of infantry soldiering, of leadership and battlecraft. Above all else, it gives the soldiers' viewpoint of those aspects of war-fighting not found in the training pamphlets.

Gary McKay has been able to get veterans to open up and give voice to things usually left unsaid, or at least rarely expressed. Being a veteran himself, he appreciates what these men experienced, and he has been able to tap into their innermost thoughts and emotions, faithfully recording how they felt then and what they feel today. Rarely does one get to examine the command chain of a unit such as this rifle company from the commander down to the rifleman.

Gary McKay interviewed the men from this company of the last battalion that served in Vietnam, and in 1993 travelled back to Vietnam with some of them. There he met with former Viet Cong and North Vietnamese soldiers, who shared their private views on one of the most tragic episodes in Australian military history. (publisher blurb)