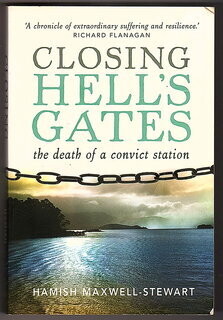 Closing Hell's Gates: The Life and Death of a Convict Station by Hamish Maxwell-Stewart

Secondhand. Good condition. Wear to book corners and edges. Previous owner has inscribed inside page. Pages have started to sun.

For 12 long years between 1822 and 1834, Sarah Island in Macquarie Harbour was the most feared place in Australia. Clinging to the shores of the wild west coast of Tasmania and hemmed in on all sides by rugged uncharted wilderness, the environment itself formed the prison walls that confined the unfortunate convict re-offenders who were sent there. But the conditions were so brutal that many went mad, or chose death or a very uncertain escape into the bush rather than spend their time in this notorious place. Based on detailed accounts from the time, Closing Hell's Gates contains dozens of personal stories of the harsh and unforgiving life that people were forced to lead, both as convict and overseer, and in so doing reveals some startling insights about human nature when it is pushed to extremes. (backcover)