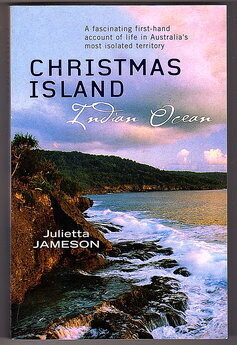 In August 2001, the arrival of the Tampa and its refugee cargo pushed a small scotty dog-shaped island into the limelight. This relatively unknown Australian territory became a name on everyone's lips as the political and social debate raged around this dot in the Indian Ocean.

Julietta Jameson, like many of us, was intrigued by Christmas Island and wondered where it was and how it came into being. Curious, she booked a flight and travelled to this tiny island, 2600km north-west of Perth and 360km south-west of Java, determined to find out more about the island and its people.

She stayed for three months. What she found was an amazing tropical island paradise, surrounded by rugged coastline, turquoise blue waters and breathtaking rainforests. A naturalist's dream, Christmas Island is a national park sanctuary filled with endangered frigate and migratory birds and the infamous red crabs that migrate across the island like a real-life Red Sea.

Set against this beautiful backdrop of nature and wildlife, Julietta also discovered an island with an amazing cultural history and was welcomed into a vibrant tightly knit community of Muslims, Chinese, Malays, Europeans and Australian mainlanders. (publisher blurb)