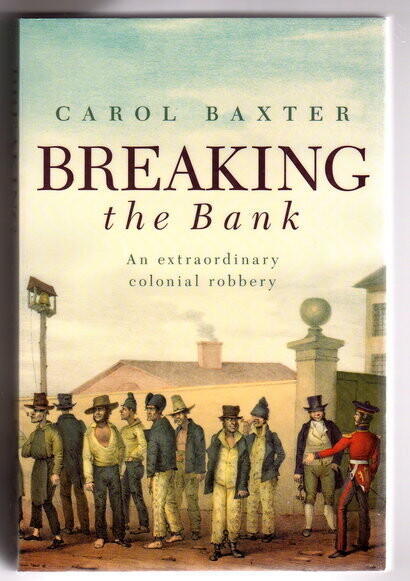 Breaking the Bank: Am Extraordinary Colonial Robbery by Carol Baxter

It was the largest bank robbery in Australian history.

On Sunday 14 September 1828, thieves tunnelled through a sewage drain into the vault of Sydney's Bank of Australia and stole 14 000 in notes and cash - the equivalent of $20 million in today's currency. This audacious group of convicts not only defied the weekly exhortation 'thou shalt not steal!', but they also targeted the bank owned by the colony's self-anointed nobility.

Delighted at this affront to their betters, Sydney's largely criminal and ex-criminal population did all they could to undermine the authorities' attempts to catch the robbers and retrieve the spoils. While the desperate bank directors offered increasingly large rewards and the government officers cast longing looks at the gallows, the robbers continued to elude detection. Then one day ...

With a rich cast of characters who refused to abase themselves to the establishment, this meticulously researched and fast-paced history tells the story of the daring Bank of Australia robbery and of the scheming robbers, greedy receivers and unfortunate suspects whose lives were irrevocably changed by this outrageous crime. (publisher blurb)