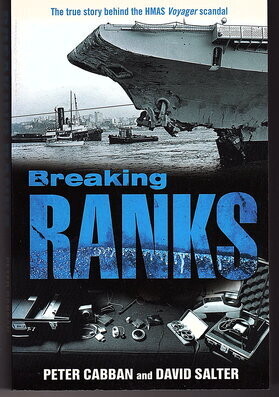 Breaking Ranks: The True Story Behind the HMAS Voyager Scandal by Peter Cabban and David Salter

An extraordinary story with all the elements of an epic thriller- a dramatic naval disaster, the tragic loss of life, exploits of bravery, courtroom action, political intrigue, cover-ups and conspiracies - written by the whistleblower who has finally decided to put pen to paper.

There's an old saying that justice delayed is justice denied. It's taken two Royal Commissions and more than forty years for the original whistleblower, Peter Cabban, to tell the story of the Voyager - Australia's greatest naval disaster. Forty long years to tell the truth - one that the Australian navy and others in government would rather we not know.

In 1963, Peter Cabban was second in command on the destroyer HMAS Voyager, under Captain Duncan Stevens. Cabban quite liked Stevens but their relationship was strained. The Captain was a notorious alcoholic - his nickname was "Drunken Duncan". Cabban found it difficult to believe that the navy would continue to entrust Stevens with active command.

Cabban eventually left the navy and three months later, during night exercises on February 10, 1964, the Voyager inexplicably turned into the path of the aircraft carrier HMAS Melbourne and was sliced in two. Captain Stevens and two of his senior officers were instantly killed and 82 of her crew perished.

Government and naval cover-ups, treachery and betrayals, scapegoats and miscarriages of justice, Cabban, like all reluctant whistleblowers, walked away with his life ruined. This reads like a Tom Clancy but tragically, it's not fiction.