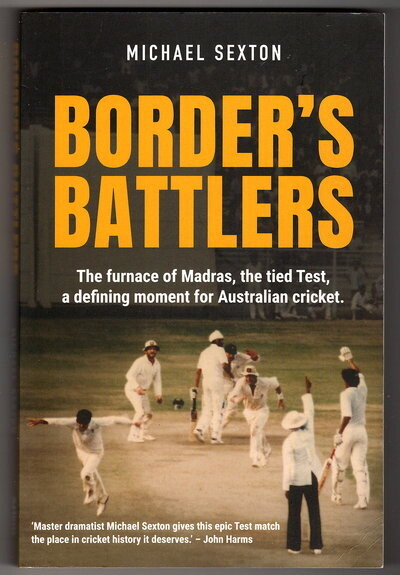 Border’s Battlers: The Furnace of Madras, the Tied Test, a Defining Moment for Australian Cricket by Michael Sexton

It's the 1986 tour of India, and Australian cricket is reeling from the loss of key players to retirement and rebel tours. Few give Australia a chance against a surging India, and even Allan Border doubts his ability to lead this team.

What follows is one of the most titanic struggles in cricket history. Played in oppressive conditions, the first Test in Madras (now Chennai) swung like a pendulum. Tensions reached boiling point on and off the field. Dean Jones's 210 was one of the gutsiest Australian knocks ever, Greg Matthews bowled for most of the final day (in a jumper!) and Ray Bright took five wickets despite being seriously ill.

The climactic and controversial final ball forced a tie for only the second time in Test history and set a course for Allan Border to remain as captain.

In Border's Battlers, Michael Sexton details the momentous occasion when Australia drew a line in the dust of Madras and drew inspiration from the fight. The team returned to Madras the next year to launch a winning World Cup campaign as rank outsiders and the seeds of a new golden age of Australian cricket was sown. (publishers blurb)