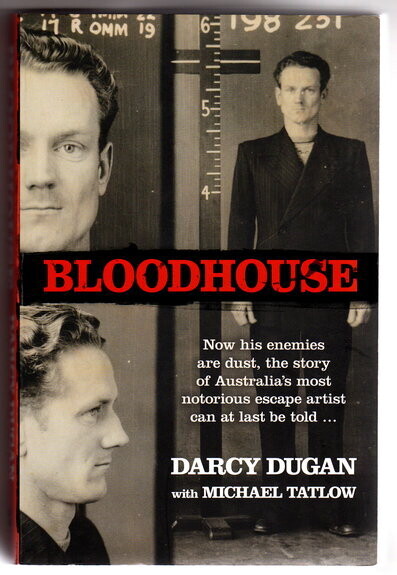 Darcy Dugan (1920 – 1991) career criminal, escape artist, scourge of the authorities and corrupt police, can now add master storyteller to his bag of tricks.

Written in his own words during his long years in prison, smuggled out to keep it safe from his enemies, Bloodhouse is Dugan's brutally honest, insightful and thoroughly entertaining account of his colourful life in and out of jail.

Throughout his criminal career, he committed several hold-ups but it was his daring escapes from prison that captured the public’s imagination and he became known as 'the Houdini of the prison system’. One escape took place after less than 30 minutes in Long Bay Jail, another from a prison tram transferring him between Darlinghurst Courthouse and Long Bay - as the tram passed Sydney Cricket Ground, Dugan sawed a hole through the roof and climbed out. He attempted another five near-escapes, including from Grafton Jail, the infamous ‘Bloodhouse’.

In all, Dugan spent 44 years in jail. His campaigns against brutality and corruption within the system marked him for life. Fearing execution if revelations in the book became public, Dugan urged his friend, journalist Michael Tatlow, to suppress it until he and his enemies had ‘turned to dust’. Tatlow went on to write the concluding chapters of Bloodhouse. The result is a must-read account of a true Australian original. (publisher blurb)