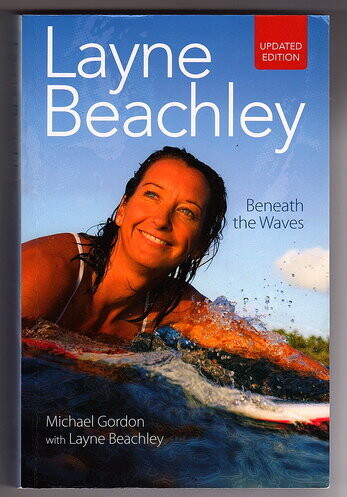 Beneath the Waves by Layne Beachley and Michael Gordon

Layne Beachley's story is a testimony to the power of self-belief. It is about the skinny little girl they called 'Gidget' who overcame a king tide of obstacles, from chronic fatigue and depression to debilitating injury and family tragedy, to become an icon in the male-dominated world of competitive surfing.

Winner of a record seven women's world championships, she also blazed trails in the mountainous waves of Hawaii's outer reefs, earning respect where it mattered most - in the water. Beneath the surface of the happy, positive public persona is a story of loss, redemption and the search for identity, revealing the intimate details of how Layne and her birth mother, Maggie, found each other twenty-seven years after her birth, the highs and many lows on their quest for reconciliation and the dark secret of Maggie's past.

It is also a love story, describing how Layne fell in and out of love with Hawaiian big-wave rider Ken Bradshaw and found true happiness with INXS rock star Kirk Pengilly. Based on extensive interviews with more than thirty central figures, including classmates, friends, family and many of the biggest names in surfing, and written by award-winning journalist Michael Gordon.