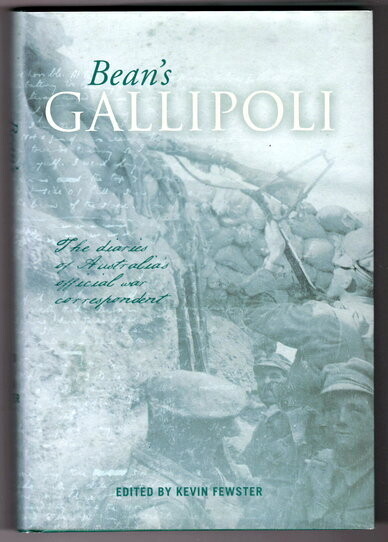 Probably no person saw more of the Anzacs in battle on Gallipoli than C E W Bean. After sailing with the first convoy, he landed with them on that fateful first morning of 25 April and remained on Gallipoli until the evacuation despite being wounded.

He was unique among the war correspondents of his day: no place in the line was too dangerous for him. No other pressman dared to go ashore at the first landings. Throughout the fiercest battles, he would sit in the dust or mud of the frontline trench taking notes or making sketches. Night after night he sat in his tiny dugout and wrote in his diary all that he had seen and done.

Its pages flow with powerful descriptions of battle, touching eulogies to the common soldier, and scathing criticisms of senior officers whose mistakes cost men their lives. He took over 1100 remarkable photographs with the diary they constitute the most graphic personal account we have of the events of Gallipoli.

Bean's Gallipoli reveals the innermost thoughts, hopes and criticisms of the man who, more than any other, shaped the Anzac legend. This is a new edition of Frontline Gallipoli. It contains new extracts from Bean's diaries, new commentary by Kevin Fewster, and over 80 photographs, most of which were taken by Bean at Gallipoli. (book flap)