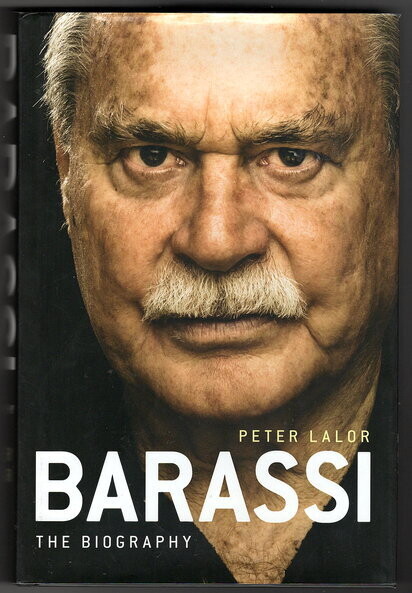 Barassi: The Biography by Peter Lalor

Ron Barassi is modern football's firstborn son and saviour. His father wore the No. 31 then was tragically killed in the Second World War months after playing in a premiership.

Ron Barassi junior was raised in the Australian bush before moving back to Melbourne with his devoted mother. Later the boy was taken under the wing of legendary coach Norm Smith. He slept in a sleep-out at the back of Smith's home as together they conspired to take football to another level. Smith turned Barassi into the definitive - some argue first - ruck rover.

The pair won six premierships in a golden era for the Demons. Barassi's break with Smith, and Melbourne, shocked the football world. It was the 'death of loyalty', an unconscionable betrayal, but at Carlton and later North Melbourne Ron fulfilled the second part of his destiny. The game's most determined player became its super coach. Football's hot-gospeller. At half time in the 1970 grand final, with Collingwood miles in front, Ron screamed 'handball, handball, handball' and the game changed forever.

Barassi goes behind the scenes with the game's most revered and most loved figure. It is an examination of an unexamined life. Where did the passion come from? Why did he care so much? How did the events of his early years resonate through the decades?

In an era where our sporting heroes are flawed and fallen Ron Barassi is a true icon, a man whose integrity burns bright to this day. In his 70s he trekked Kokoda and risked his life helping a woman being attacked on a St Kilda street. Ron Barassi is a hero for the ages and Barassi is his unforgettable story. (publisher blurb)