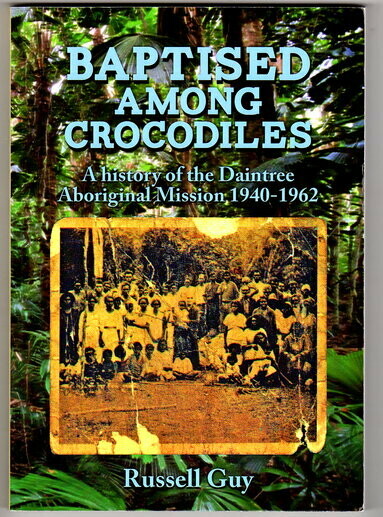 Baptised Among Crocodiles: A History of the Daintree Aboriginal Mission 1940-1962 by Russell Guy

Secondhand. Good condition. Ex library book with external stickers removed. Some general edgewear. Separation of laminate from board backing near the barcode on the back cover. Date due slip on inside page. Book has been cleaned and binding is very good.

In the early 1930s, an Irish Pentecostal missionary, Isobelle Hetherington, arrived in Far North Queensland. She was accompanied by an Aboriginal woman named Nellie who was a talented vocalist. Together they began ministering to the Kuku Yulanji people who had been forced to gather in small groups throughout the Daintree Rainforrest.

Ten years later a mission was built on land purchased by the Assembly of God (Qld.) beside the Daintree River. (back cover)