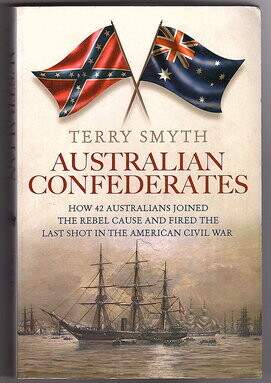 Australian Confederates: How 42 Australians Joined the Rebel Cause and Fired the Last Shot in the American Civil War by Terry Smyth

Secondhand. Good condition. Ex library copy with no external stickers. Date due slip on inside. Wear to book corners and edges. Book is clean and binding is very good.

In the summer of 1865, when a Confederate warship sailed into the port of Melbourne, 42 men secretly enlisted to fight for the South in the American Civil War. On the notorious raider Shenandoah - the scourge of the Yankee merchant fleet - they sailed off to adventure and controversy, and fired the last shot of the war.

When the Shenandoah dropped anchor in Hobsons Bay, the fledgling colony of Victoria was taken by surprise, and the Confederates had no way of knowing whether they would be hailed as heroes or hanged as pirates. To the rebels' surprise, Melbourne took them to its heart. Victorians came in their thousands to visit the ship, and its officers were feted as celebrities. They were wined and dined by the city's elite, attended a ball held in their honour, mixed it with Yankee sympathisers in a barroom brawl, and charmed the ladies of Melbourne and Ballarat with their grand Southern manners.

Meanwhile, in defiance of the law against foreign warships recruiting in a neutral port, 42 men were smuggled aboard in dead of night and, once at sea, signed up to join the Confederate Navy. For Australia - not yet a nation - 1865 was a watershed year in an age of gold rushes, bushrangers, disputes between rival colonies, and fears of foreign invasion. For war-torn America, it was the turning point in the deadliest conflict in that nation's history. After the defeat at Gettysburg, the tide had turned against the Confederacy but the South was determined to fight on, and, in the war at sea, the Shenandoah was the last best hope.