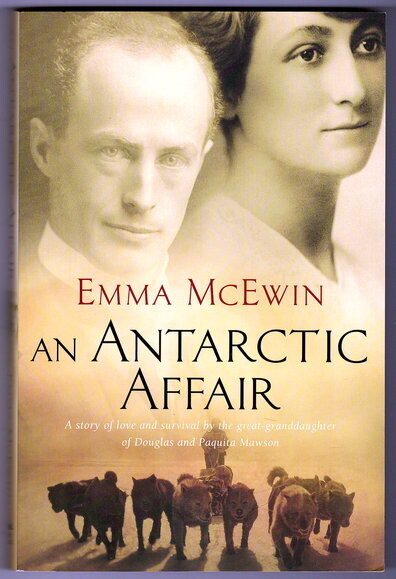 An Antarctic Affair is a story of love and survival, written by Emma McEwin, the great-granddaughter of Sir Douglas and Lady (Paquita) Mawson.

When scientist and explorer, Douglas Mawson leaves for the Antarctic in December 1911, as leader of the Australasian Antarctic Expedition, he expects to return and marry his fiancee, Paquita Delprat fifteen months later. However, in the southern summer of 1912, while on a three-man sledging journey, his two travelling companions both die in horrific circumstances, leaving Douglas to travel the last one hundred miles to safety alone, on the brink of starvation.

He survives but his late return to base in February 1913 leads to him missing the ship back to Australia and he is forced to endure a second winter in the Antarctic, in the windiest region on earth, with six other men, one of whom loses his mind.

By the time he returns to Australia in February 1914, he has not seen Paquita for more than two years and barely communicated with her, the minimal contact and the long separation having pushed her love and patience almost to the limit.

Inspired by their story and their characters since childhood, Emma explores the reasons why her great-grandfather survived and the very important role Paquita, who became his wife and biographer, played in his survival and success.

Drawing on the love letters that Paquita and Douglas wrote to each other during their engagement, 1910-14, which were discovered by chance in the 1990s and published in 2000, stories and anecdotes passed on to her from her grandmother, as well as the huge body material held publicly and privately by the Mawson family, Emma presents the practical-minded scientist and academic, Douglas Mawson, in a warmer light, as a man who was in his own way, a romantic and capable of deep love.

Her book is unique in that she weaves in stories of other explorers and expeditions and, by putting Douglas Mawson in polar and historical context, and by according Paquita the recognition she deserves as his greatest supporter, we gain a new appreciation of his extraordinary achievements. (back cover)