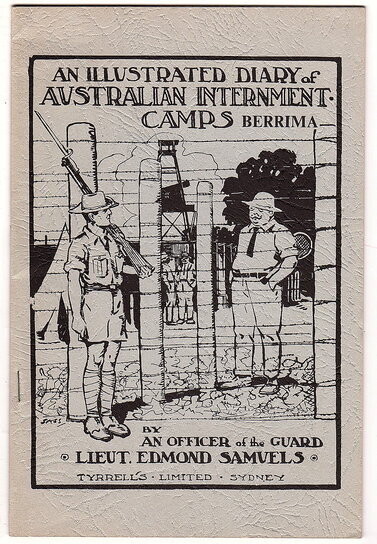 An Illustrated Diary of Australian Internment Camps by an Australian Officer of the Guard, Edmond Samuels

This pamphlet is a facsimile of the 1919 diary by Edmond Samuels, Officer of the Guard. Three internment camps are described - Holdsworthy German Concentration Camp, located near Liverpool NSW, which accommodated five to six thousand Germans, Australians and Turks, and included a number of the crew of the Emden. Trial Bay Detention Barracks, near Kempsey NSW. where 500 prisoners of war were interned, mostly businessmen from all parts of the world - tea planters from Ceylon, rubber planters, ship's officers, and military officers. The third camp was located at Berrima NSW, near the Berrima Gaol. It was a satellite camp for Holdsworthy and held German prisoners.