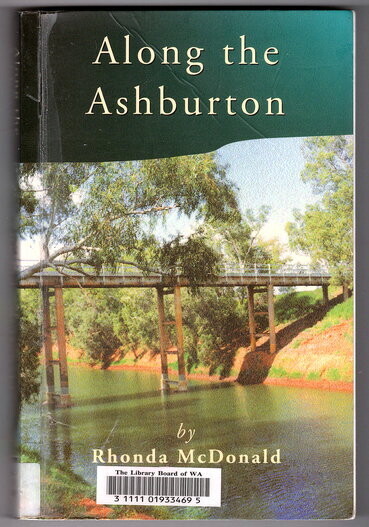 Along the Ashburton by Rhonda McDonald

Secondhand. Good condition. Ex library book with stickers, stamps and protective plastic covering. Partial date due slip on inside page. Wear to book corners and edges. Book has been cleaned and binding is still very good.

The history of Onslow and the stations of the Ashburton. Rhonda McDonald (nee Stidworthy) spent much of her childhood and married life in country similar to that of which she has written.

She commenced her schooling at Onslow in 1936 and finished it at the Presentation Convent Carnarvon, along with some of the people mentioned in this book. After leaving school Rhonda worked on the Carnarvon telephone exchange before becoming Gascoyne Traders' first secretary. Eventually, she married Allan McDonald of Mangaroon Station, where they lived until their retirement to Perth.

Along the Ashburton is not a book of numbers and statistics. It is the human stories of the people who helped open up one of our last frontiers, the Ashburton. It was settled by pastoralists who took up large tracts of land, some exceeding a million acres.

The pastoral age was a grand age while it lasted - in Western Australia that was approximately one hundred years. The Ashburton was taken up in the late 1860s. During the hedonistic days of the 1950s wool met its highest level. A rule of thumb was a £ for an lb, that is a pound of wool for an Australian pound.

The squatter’s wool cheque contributed more to the nation than the profits of industry and mining combined. Pastoralists, wool and wealth became synonymous. Then almost without warning the entire edifice crumbled away. By the 1970s, due mainly to synthetics, wool had lost its glamour.

In pioneering the Ashburton, Aborigines also made their contribution to the community. Many settlers or their descendants mentioned the wonderful loyalty they or their fathers had experienced from these people. The Asians, many of whom were indentured to the stations as cooks or gardeners, and the Afghans with their teams of camels, also made a valuable contribution to working Along the Ashburton. (back cover)