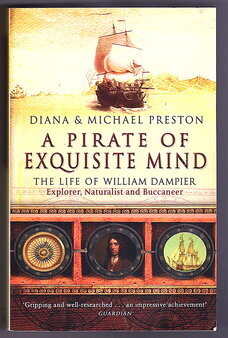 A Pirate of Exquisite Mind: The Life of William Dampier: Explorer, Naturalist, and Buccaneer by Diana Preston and Michael Preston

William Dampier, (1651-1715), was an English adventurer and pirate who preyed on ships on the Spanish Main. Poor and ill-educated and determined to make his fortune, he nonetheless had a passion for exploration and scientific research.
Dampier performed many extraordinary achievements in his lifetime: he mapped the winds and the currents of the world's oceans for the first time; led the first recorded party of Englishmen to set foot on Australia - 80 years before Cook; and was an enthusiastic naturalist - following his visit to the Galapagos islands he wrote about their wildlife 150 years before Darwin, who drew on Dampier's notes in his own work.

He was possibly the first travel writer: "A New Voyage Around the World" was embraced by the literary world and became and instant bestseller when it was published in 1697 - it was said to have influenced the novels of Swift and Defoe.

This biography examines Dampier the man - full of contradictions - and analyses why he who achieved so much "blew it" later in life, declining into the scandal, controversy, failure and even farce. A unique man ahead of his time, he lived a large part of his life among pirates yet managed to preserve what Coleridge called his "exquisite refinement of mind". ( https://blackwells.co.uk/bookshop/product/A-Pirate...)