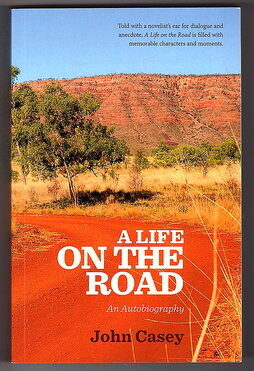 A Life on the Road: An Autobiography by John Casey

Born in 1923, John Casey combined preferred making money than going to school. His early money-making ventures included selling rabbit pelts, lollies and horse manure. By twelve years old, John was taking care of horses no one else could handle.

One morning, without telling his parents, he boarded a train for Sydney. For four years he survived on his own. When WWII came, underage John signed up for the RAAF. The war left its mark on John. He ran from his young wife.

For twenty years John travelled the length and breadth of Australia as a hotel cook and mining camp cook/manager. His exploits were legend and his attachments many although non were lasting.

John had his share of successes but his life has also been touched with tragedy. His story, sometimes humorous and sometimes heartbreaking, paints a vivid picture of a man who has lived life to the full. (back cover)