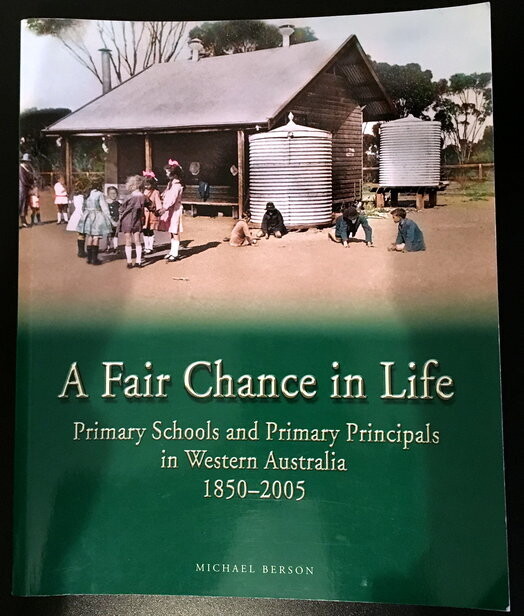 A Fair Chance in Life: Primary Schools and Primary Principals in Western Australia 1850 - 2005 by Michael Berson

The development of primary school education in Western Australia from the perspective of school leaders.

The book begins with a brief look at the colonial, class-based education system in 1849 and pays tribute to Cecil Andrews who brought education to rural communities, by having one-room schools constructed throughout the Wheatbelt and South West.

By the 1930s and 40s, these small rural schools were proving too costly to maintain and were consolidated into large schools. Headmasters of these schools exercised significant authority.

From the 1930s to the 1950s community demands for the exclusion of Aboriginal children from Government schools was met with resistance from headmasters and school inspectors who made it clear their belief that a good education was the right of all children.

After WWII, the Education Department was fully occupied with the secondary education system and the primary school's centralised curriculum soon became outdated. Primary principals strengthened their influence on their schools through the Western Australian Primary Principals' Association.

The advent of the Whitlam Government in 1972 and the work of the School Commission put into operation the idea of "a fair chance for all" by putting new resources and management practices into disadvantaged schools. This approach became the forerunners of the way all primary schools would operate.

The Western Australian Primary Principals' Association from the 1980s has become more politicised, boosting its financial base, widening its membership in an effort to fortify its commitment to a fair chance for all children in Western Australian primary schools.