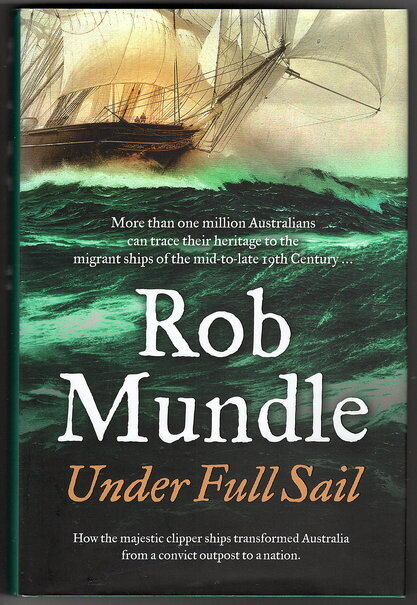 Under Full Sail by Rob Mundle

Secondhand. Good condition. Wear to book at spine top and tail. Ex library copy with small stripe of sticky tape on inside blank page. Otherwise, interior and binding are excellent. Dust jacket has light creasing at top and tail.

How the mighty clipper ships transformed Australia from a convict outpost to a nation.

More than one million Australians can trace their heritage to the migrant ships of the mid-to-late 19th century... The story of the Clipper ships, and the tens of thousands of migrants they bought to the Australian colony of the nineteenth century, is one of the world's great migration stories.

For anyone who travelled to Australia before 1850, it was a long and arduous journey that could take as much as four months. With the arrival of the clipper ships and favourable winds, the journey from England could be done in a little over half this time. It was a revolution in travel that made the clipper ships the jet airlines of their day, bringing keen and willing migrants 'down under' in record time, all hell-bent on making their fortune in Australia.

Rob Mundle is back on the water, with a ripping story that starts on the sea, aboard a clipper ship charging across the Southern Ocean, laden with passengers heading for Melbourne in response to the lure of gold.

Brimming with countless stories of the magnificent ships and fearless (and feckless) characters we find on them, like Englishman "Bully" Forbes and American "Bully" Waterman driving their ships to the limit and the tragic legacy of the many shipwrecks that were so much a part of this era. (back cover)