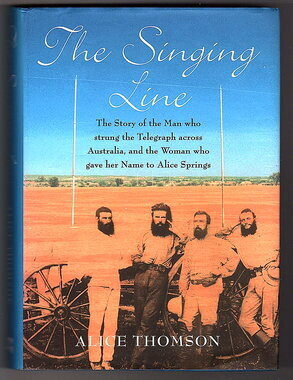 The Singing Line by Alice Thomson

Secondhand. Good condition. Ex library copy with no external stickers. Date due slip and borrower card pocket on inside page. Pages are sunned.

In 1855 an impoverished young scientist from Greenwich told his guardian that he was off to chance his luck in Australia - as Government Astronomer and Superintendent of Telegraphs for the small colony of South Australia.

But first, he needed a wife. The young man was Charles Heavitree Todd. What he failed to mention was his real ambition - to string a telegraph wire across one of the last uncrossed colonial wildernesses and to connect Australia with Britain. The young woman who offered herself as his partner in these wild ventures was Alice, his guardian's eighteen-year-old daughter.

In 1997, their great-great-granddaughter Alice Thomson, named after the intrepid lady, set out with her husband to follow in their footsteps and to track the telegraph and her ancestors. They travelled from Adelaide over the thousands of miles of desert, outback, swamp and mountain that Charles Todd crossed in the 1870s with 400 men.

Racing against time and financial penalty clauses, dogged by disease and disaster, Todd's men paused to found Alice Springs (naming it after his wife) before heading north through the mountains towards Darwin, to join up with the undersea cable from Java.