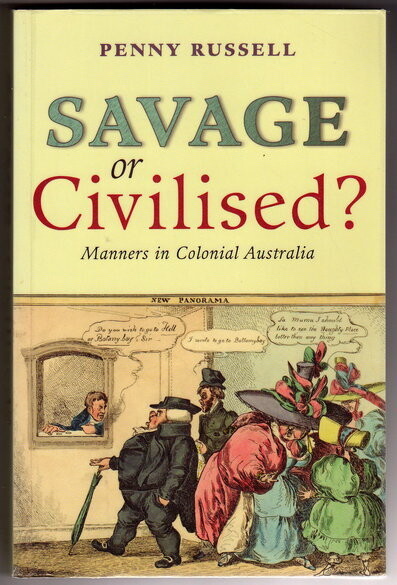 Savage or Civilised? Manners in Colonial Australia by Penny Russell

Secondhand. Very good condition. EX Library copy with external stickers removed. Has protective plastic covering and remnant of date due slip on inside. Minor wear to book corners. Book is clean and binding is excellent.

In colonial Australia manners marked the difference between savagery and civilisation, between vulgarity and refinement. Colonists recoiled in shock and confusion at the customs of Indigenous Australians, but they also sensed the savagery lurking in white society - in the restless bodies of children, the uncouth tongues of bullockies, the absurd pretension of society matrons, and the violent impulses of gentlemen swift to defend their honour at gunpoint.
From the sparse pastoral frontiers to the crowded city streets of colonial Australia, manners mattered. Penny Russell tells some of the intriguing stories of colonial social conducts: some merely awkward, some vaguely confusing, some downright mortifying, Savage of Civilised? offers a fascinating glimpse into a very different world. (back cover)